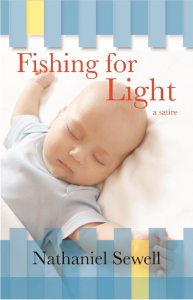 How do you take your coffee?

Ms Prosperina is a genetic monster trying to take over the world by spiking the coffee at her Starry Eyed Coffee Hut chain … and she’ll stop at nothing.

It’s up to her unwitting creator, the geneticist Professor Quan, to stop her. In an attempt to correct his mistake, Professor Quan creates a network of people with the power of true love genetically coded within them. They alone might resist Ms Prosperina’s attempt to change the course of humanity.

Everything hangs in the balance when Eddie, altered at birth by Quan’s genetic mutation powder, fails to follow his pre-ordained destiny. The trauma of his father’s death has left Eddie drifting through a meaningless life and has caused him to stray from Quan’s master plan.

Will Quan succeed in helping Eddie regain the light behind his eyes and will they succeed in foiling Ms Prosperina’s evil plans?

Get a signed copy direct from the author

You can purchase a signed copy of Fishing for Light directly from the author for $14.99 including shipping.
END_OF_DOCUMENT_TOKEN_TO_BE_REPLACED

Fishing for Light by Nathaniel Sewell tells an incredibly entertaining tale that is full of quirky characters and grandiose schemes. I totally enjoyed immersing myself in this satire.

Nathaniel Sewell’s FISHING FOR LIGHT is a satiric look at the use of technology and particle physics to control the human race. Edie Wilcox finds himself caught up in this unseen “quantum war” between Professor Quan and his evil genetically modified daughter, Ms. Proserpina.

It was funny, in an over the top kind of way. I mean it’s got the IRS, genetic monsters, and the Hope Diamond! … I did enjoy the hyped up war between a father and a daughter. His genetically modified, evil daughter! It’s got a lot of funny situations, and a lot of great characters. … I laughed quite a bit, and I was entertained, I think the author did a great job of taking what we would usually expect and twisting it around a bit. I think overall, for a satire lover, this book would be a home run, …