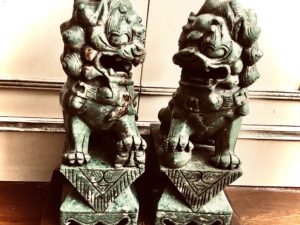 My maternal grandparents inspired my third novel, 5th&Hope. They were part of The Greatest Generation.

In 1926, they met at the corner of 5th Street and Hope Street in downtown Los Angles, California. They married in a small home in Pomona, California, and then graduated from BIOLA – Bible Institute of Los Angeles.

If you are curious, remember the “Jesus Saves” signs from pop culture? Those signs went up above the now gone BIOLA building – AFTER my grandparents had left Los Angeles.

They really drove a 1930 Model A Ford along the original Route 66. It had to have been more than a month’s journey back to Eastern Kentucky where they spent the rest of their lives happily being active missionaries.

My grandmother Hazel was a nurse, and my grandfather Sewell was a preacher. And yes, they followed their faith and calling basing from a quaint white chapel on a flat pie shaped stretch of land near the meandering Troublesome Creek in Clayhole, Kentucky.

One day, I remembered when I was sixteen; I had driven my grandfather home along a narrow two lanes road after my grandmother’s funeral. He talked to me in a way he had never talked to me. He talked about his life and the fact he had lost his best friend. I could not possibly understand the wisdom he was sharing, I had just earned my driver’s license.

Fast forward, I’m now in my mid-forties and I realized I did not understand them.

In part, it had also occurred to me they had both lived through World War I, The Great Depression and World War II. After my research, I had a tiny inkling what The Greatest Generation means literally and figuratively.

Now, I think we are experiencing a Third World War. It’s not a war between nation states over power and resources. It’s a war against an unseen virus that does not take prisoners and does not care about your religion, your heritage or your social status.

Perhaps being a good citizen and accepting the social distancing guidelines, I’ve had time to wonder what my grandparents might think or do?

And yes, I’m keenly aware where the photo I’ve shared comes from and that they symbolize Chinese mythical lion-dogs. One is male and the other female and their purpose was as guardians of the temple.

I think the symbolism makes its own statement.

To answer my question, I think my grandparents would have already had a game plan and would not have panicked. They would have clicked off the television or radio and went about their business.

They would have already stocked their cellar with canned foods.

The wooden shelves with non-perishables.

They would have saved enough money to get by and understood each penny spent for a vital purpose. And then they would have tended to the needs of their community.

And they would have kept positive attitudes.

They prepared for something coming that they could not see or imagine. But they had learned to be prepared and trust God.

In other words, they would have accepted this COVID-19 pandemic as another man-made calamity and trusted in a higher-power to guide their actions.

I suspect the older generations reading this post smiled and nodded, remembering their parents, or about themselves having lived through their own tough times. I know I smiled, remembering my grandparents as I wrote this modest screed.

I have another question. In your daily life, can you see the COVID-19 virus?

I’m not a parent for a variety of reasons, but I think this exact moment there are children learning valuable life lessons that will last them their lifetimes. Lessons they will remember and hand down to their children’s children some day recounting a great world war against an unseen evil virus.

I think and I feel there are powerful things we cannot see, but I trust they are nearby. Those things are good and evil all at the same time. (And I hope you don’t think me looney or unsettled.)

My grandparents spirits are always with me. They influence my thinking.

Sometimes I fail them and sometimes I please them.

But I have to make my own decisions and accept the result.

A C S Lewis reference, I wonder if Screwtape and Wormwood have decided I’m a worthy Patient to influence. After all, I have free-will, as the saying, it’s not about falling down, it is will you get back up?

As I’ve learned from my grandparents and my life experiences.

I’ll get back up.

And we’ll all get back up, dust ourselves off and celebrate life.